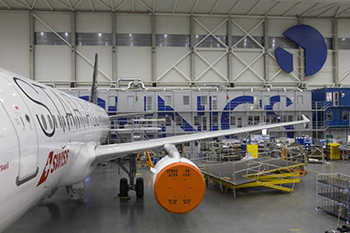 FL Technics has signed a contract with Germanwings for the provision of base maintenance services. The contract with the European carrier is an anticipated result after having launched new base maintenance management practice bringing FL Technics production services to the next quality level. The first 3 out of 5 aircraft have already landed for C- and D-checks. Germanwings GmbH is a German low-cost airline based in Cologne. The carrier operates a fleet of 45 Airbus A319/320 aircraft. It is a subsidiary of Lufthansa Group.

Another prominent Lufthansa Group carrier to have recently signed a cooperation agreement with FL Technics is Swiss International Air Lines. The 5-year-long agreement covers base maintenance, engineering and DOA services. Its first aircraft has already arrived at FL Technics for a window frame replacement.

“Industry-wide, Airbus 320 aircraft are known to be vulnerable to such structural defects. Luckily, our engineers and technicians are experienced in dealing with these types of repairs,” said Zilvinas Lapinskas, CEO at FL Technics. Swiss International Air Lines is a Swiss carrier which serves over 100 destinations in 43 countries from Zurich and Geneva. It operates a fleet of 91 aircraft. Swiss International Air Lines is also a part of the Lufthansa Group.

FL Technics is a family member of Avia Solutions Group, a leading aerospace services group with what has become almost 100 offices and production facilities worldwide.