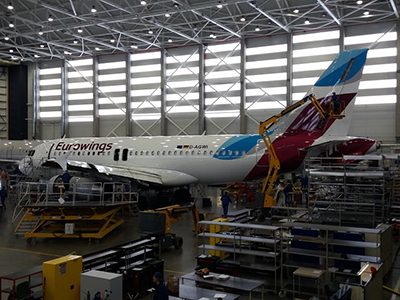 FL Technics, a global provider of integrated aircraft maintenance, repair and overhaul services, has found a new client. The company signed the agreement with Eurowings Europe, member of Lufthansa Group.

As it is agreed, Eurowings Europe will receive extended services of base maintenance, engineering and DOA for upcoming 5 years.

“The first aircraft already landed in Kaunas. We have already started taking care of it and we’re looking forward to welcome the other scheduled planes in our hangars,” said Zilvinas Lapinskas, CEO of FL Technics. According to Z. Lapinskas, FL Technics team was trained by Eurowings Europe beforehand and is working now in AMOS, the MRO software solution preferable by main airline operators in Europe.

Eurowings Europe is a low-cost airline registered in Austria that is a subsidiary of Lufthansa Group. It began operations in June 2016. As of September 2017, the airline operates from two bases in Austria using eight Airbus A320 family aircraft. It has adopted the corporate identity of its German sister airline, Eurowings.

FL Technics is a family member of Avia Solutions Group, a leading aerospace services group with what has become almost 100 offices and production facilities worldwide.